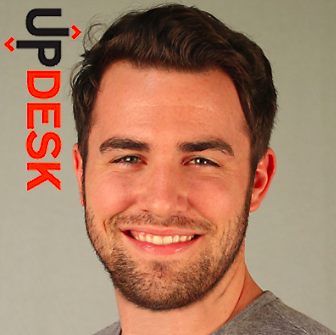 Kamron Kunce, Director of Community Relations at UpDesk, shared the the seven strategies of social media success, UpDesk’s health benefits, finding the right keywords and influencers, the power of social listening, and how to build a local community.

In their two years of business, Kunce identified seven key strategies UpDesk has followed for achieving success in social media:

Identifying and Tracking the Right Keywords

Kunce underscored the power of social listening, or simply listening to the market. Lately, more research and studies have been published related to the ill effects brought about by sedentary behaviors and prolonged sitting, so much so that “sitting is the new smoking” has become a popular catchphrase in the standing desk market.

Kunce explained how they pull keywords and phrases from such articles and research to dig into Google Keywords and discover which keywords garner the most amount of traffic per month. Then, he uses those high-ranking keywords for social listening.

Kunce revealed that although he is not a big user of the many social media tools now available, TweetDeck is his exception. Kunce is more comfortable in staying focused on one task at hand. He further explained that using tons of apps and tools eventually gets too complicated. That said, he only uses a combination of Google products and new articles coming out.

Kunce emphasized how he likes to keep things simple and just use one tool for now, considering the fact that UpDesk is unlike anything else on the market today. Kunce and his team work hard to listen and engage with their customers, and to spark conversations through the power of social media. However, he’s not ignoring the possibility of expanding their toolbelt in the future and is looking at new tools they could possibly use to further online engagement with their customers.

Kunce described tastemakers as people who already have a large audience and who set trends for others within their specific market, like celebrities or experts. He stressed the importance of connecting with the right people and figuring out how such a connection may benefit yourself and the company.

According to Kunce, finding the right people requires a combination of:

Keywords: Kunce has a list of influential people he would love to work with, like celebrities, journalists, influencers, etc.

Timing: Kunce waits for those on his list to say anything remotely close to “standing desk” or the “benefits of standing up,” then he immediately jumps in and starts a conversation.

Kunce monitors what such tastemakers are doing and reaches out through email or in person at events.

Kunce outlined what people could expect from them out of the relationship they’re trying to build with people in the market:

Providing such service is an attractive selling point that garners more word-of-mouth marketing, benefitting the company both in the present and the long-term.

In order to get a feel for standing throughout a work day, Kunce encourages people to build their own DIY project first. Once they realize the comfort of standing while working, that’s where UpDesk comes into play. In fact, Kunce sends out his favorite, online DIY solutions, which serves as a “gateway drug” into the market of standing desks.

Kunce admitted to being a religious user of Google Analytics, checking stats all day and using tools to monitor click-through rates. UpDesk also measures their success through promotions such as discount codes sent out to their audience.

Kunce has explicitly explained the following tips in finding your niche:

Moreover, Kunce outlined the process UpDesk uses to create a unique company culture that’s been instrumental to their success:

Basically, it’s about being different from anyone else in the market and doing what nobody else has done before.

Listen to the interview here: How Social Listening Powered a Company to a 7 Figure Revenue

For more information on UpDesk and to view their products, visit www.updesk.com or www.myupdesk.com, or follow them on Twitter @updesk. Connect with Kamron Kunce on Twitter @kamronkunce.

Clark Buckner is the online events manager for TechnologyAdvice, an Inc. 5000 company that researches and analyzes software to educate, advise, and connect buyers and sellers of business technology.

It’s Illegal To Ask For Passwords in California