It’s no secret that video sharing apps are a hit with millennials. With platforms like Snapchat, Vine and Instagram, teens and 20-somethings are spending their free time sharing short video clips with their peer groups, and while these platforms enable users to share back and forth, there hasn’t yet been an app that allows users in different geographic locations to collaborate on one video together. Enter Divvie, a new app that calls itself a “revolution in mobile video story telling,” and after trying it out, I don’t think this claim is overreaching. Divvie is quite possibly the next “it” app for teens (and marketers).

The brainchild of co-founders Hayden Moss, Justin Shane and Chris Risi, the creation of Divvie is quite Steve Jobs-esque, having been built over the past year in Moss’ living room. I set up a call with Moss to talk Divvie, and (admittedly) a little bit of CBS’s long-running reality show, Big Brother, as Moss is both the winner of Big Brother 12 and a former Survivor: Blood vs. Water castaway. An app that deserved a celebration, Divvie launched on the fourth of July and already is “growing insanely fast,” Moss said.

A quick look around proves that teens, the app’s target audience, make up the majority of Divvie early adopters, but there are a few familiar faces. Members of Pentatonix, the vocalist quintet winners of season 3 of NBC’s The Sing-Off, use the app to engage with their fans. Being able to both see and hear the fan’s reactions to their idol’s interaction with them is a new facet of fan-to-star engagement we have yet to see on social media. Other users who have seen the limelight include former Big Brother houseguests Rachel Reilly, Brendon Villegas, McCrae Olson and recent Season 16 evictee Paola Shea. I asked Moss which current Big Brother houseguest he’d like to have as a Divvie user and the answer was pretty clear — Frankie Grande, brother of singer Ariana Grande would definitely be the Divvie adopter to have.

The premise is simple. After creating a username and login info, users add Divvie friends by browsing their contacts or searching them by name. To create a Divvie, simply click on the video camera icon in the upper right hand corner of the screen. You can then record a five-second clip, review it, and choose to send it on to up to five friends for collaboration. I created a Divvie about writing about Divvie (Divvie inception) and sent it to co-founders Moss, Shane and Risi. When your friends have added their clip, Divvie lets you know with notifications. While it is currently only available on iOS devices, an Android version is in the works and is a “number one priority,” according to Moss. “We want Android out now … the sooner the better.”

Divvie for brands is basically a no-brainer. With current social media platforms, it’s easy for brands to interact back and forth with consumers via comments, but Divvie brings video to the table. “It’s a really cool way to humanize a brand,” Moss said. “Look at a company like Disney … like a finely-tuned machine running. Then imagine Mickey Mouse and Minnie Mouse collaborating on a video with kids.” The possibilities for marketers are immense, and those in the field would be smart to create a Divvie campaign for clients now, before everyone else discovers its potential. 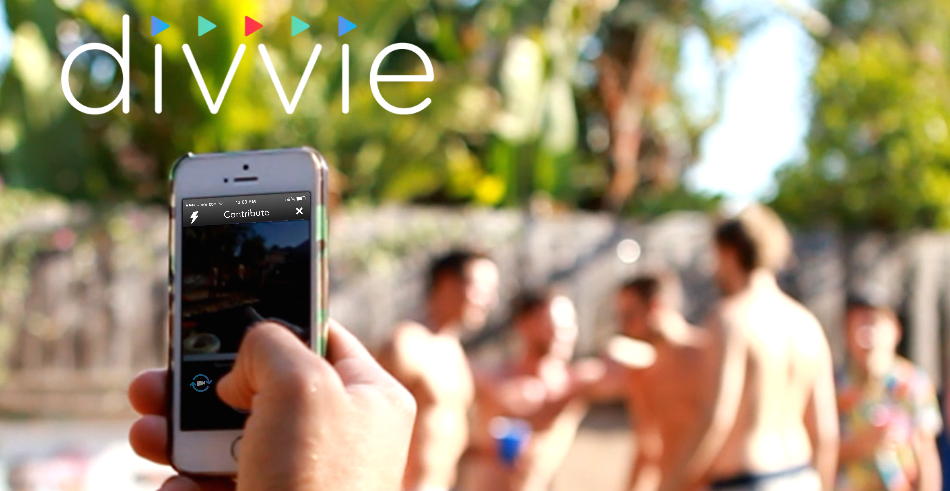 There are features still in the works for Divvie, and features that other platforms have that Divvie co-founders have chosen to opt out of. Facebook login integration, for example, while prevalent on many social media apps, will not be a feature on Divvie, after a careful look at the app’s target audience — teens. While logging in via a Facebook account may save a few seconds versus the five-form field login Divvie currently uses, it may turn off the younger millennials who download the app. “The younger generation — our target demographic — they don’t even have Facebook,” Moss said. One future feature will be the ability to share Divvies on other social media platforms.

For Divvie, an app with a well-designed and aesthetically pleasing interface and a strong sense of its own purpose, standing alone in the crowded world of social media apps should prove to be a wise choice. With benefits to both users and marketers, and an originality that is lacking in many tech startups, Divvie is being not only adopted, but used. “The stats that we’ve seen and the people that have been on it … they’re staying on it for hours at a time, which is insane!” Moss said. Social media professionals need to put Divvie at the top of their watch list, for, as Moss told me, “It’s going to be something special.”

What do you think about Divvie? Download it from the App Store and follow the team on Twitter. Then let me know in the comments below.

Where Will We Find New Social Media Professionals?