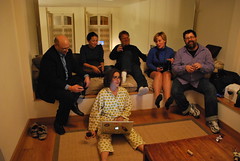 I am really thrilled to be writing this blog post. Over the past two months we have been busy organizing the logistics and finding partners for our Social Media Club House down at SxSW. Just yesterday, everything really started to fall into place – just as everything came together for Social Media Week San Francisco recently. We won't be publishing the calendar of livestreams from the club house or event dates just yet, but I can tell you its not a bloggers lounge, and its not a place where a lot of people will be hanging out. We will be dropping by the TechSet Bloggers Lounge for that ourselves, so we will hopefully see you there (and hopefully in my Core Conversation with John Biehler on Friday March 12 at 330 called "Do the Cool Kids Leave When the Suits Arrive?" </plug>.

The idea behind the club house is still the same as when we did it in Las Vegas in 2007. There are a lot of folks in our community who go to the same conferences and we wanted a place where we many of us could stay together, make media and have a shared experience of it with each other. This creates opportunities to get to know each other, to learn, to see more of the conference through each others eyes, to be social and to create content.

After resurrecting the idea in Paris, France just a few months ago with the Social Media Club House at Le Web 2009, we are doing it even bigger and better down in Austin, TX. Inspired by Real World, Forbes and our own experiences, the Social Media Club House is a mashup of epic proportions (just enough to match the grandeur of SxSW itself I think so we are psyched to kick it off here). Its one part group housing, one part live stream studio. It's where Social Media Club will be reporting on SxSW and sharing our observations with our global community members. Its where we will be hosting some serious conversations like the Synaptic Web Summit and the Engagement Summit. It's where we will host some special and intimate musical performances. It's where Social Media Club will host its local leadership celebration for SMC organizers from around the world with a big BBQ from Salt Lick on Friday March 12 from 12-2pm. And it's where Social Media Club and TechZulu will produce its daily recap livestream of what is happening in Austin throughout SxSW in conjunction with Justin.tv, Hootsuite and other media partners still to be announced.

And this blog post is your chance to join us in person as a resident of the Club House! It's also a 'save the URL' for Social Media Club members to tune into the reporting and live streaming we will be doing during SxSW from http://socialmediaclubhouse.com/, (new site and schedule coming early next week). 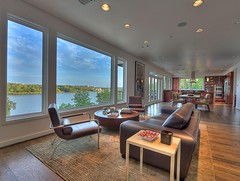 Starting today, we are looking to find one or possibly two Resident VJ's for the Club House (yes video jockey's, to call it a blog jockey would be NSFW). The chosen VJ will join myself and the other residents and reporters. In exchange for producing content on the Social Media Club House blog each day and contributing some video to our live stream and hopefully a bit more, we provide a sweet place to stay with a bunch of cool people and an experience to remember for a life time. It's also a chance to break through and show you have mad skills, so be creative, this is your moment to shine.

It's not quite American Idol, but it will put you in a position to meet a lot of cool people and put your talent on display. More details on the terms of the contest are below.

When I was originally thinking of the contest, it was going to be open to paying Social Media Club members only, as a membership benefit. But after tweeting with Eric Berto I realized we should make it open to anyone over 21 who is willing to agree to our Club House terms below. I don't want to be the guy saying pay 100 bucks so you can enter the contest and then maybe not win – that's not the sort of membership experience anyone should have. In the future though, we will have some things open to only members (ie, this same opportunity). But that will only be after we can show you the value we will provide in our new members web site and we complete our upcoming reorganization (or initial organization as some of you may be thinking – ha).

Look, this contest is really simple, we want to have you producing great media with us each day out of the Club House. For that, you get to stay there with us and some other really cool people who will be announced very soon.

How to enter. Shoot a video that is under 3 minutes (bonus for being awesome and doing it under 1 minute) telling us why you would be a great Resident VJ in the Social Media Club House. Send us an email to socialmediaclub at gmail dot com with your name, social url's, phone number, the dates you are going to be in Austin, a link to your video entry online (please also tag it #SMCH) and a link to some blog posts you wrote from another conference you attended (whether live blogging it, summarizing a session, summarizing the experience, writing about the party scene, whatever it might be that you think would be relevant.)

If you want to, you can also tweet at us with a link to your video and we will retweet it for others to see from the @socialmediaclub account. The winner be chosen at the sole discretion of the Club House producers, a full list which will be published on this blog in the coming week but right now it includes me.

What we are offering is a chance to be our roomie for SxSW for either interactive, music, or possibly both. What we are asking for is that you serve as the resident club house VJ, reporting everyday on whats happening in Austin. It's gonna be fun. Here is a simple statement of the general terms:

We provide you a bed in Austin, TX with a roof over it between March 11th-21st in this really cool house (ok, its a mansion, really) we rented on Lake Austin. There will be about a dozen or so other people staying there, maybe a couple more on some nights as a place of last resort for our friends and misplaced celebrities. Chances are several of the meals will be covered like the BBQ we are hosting for our Social Media Club chapter leaders, but you should be prepared to spend a little money here and there for food, transport and having fun. You cover your own travel (unless we get a last minute travel sponsor) to and from the Club House from wherever you are in the world. Winner must be 21 years of age or older so please don't submit an entry if you are not. We are planning to have some transportation to and from the convention center daily as the house is 15 minutes away, but we can not guarantee it to be on call and it will not be available around the clock.

The bottom line is we think it would be cool to make some content together and we wanted to do a talent search to find someone to do it with us. Perhaps that is you…

Please Note: We would love to be more open with the Summits and other things we are doing in the Club House, but there are just some physical constraints that don't allow for us to open it up to a big group. It's intended to be more like a private studio then an event venue. The other thing is, the house is in a residential neighborhood, so out of respect for the house's owner we just can't do any public events here. So instead, the summits are essentially invited guests in an executive round table format to discuss the topic and stream it to the world. We are still seeking sponsors to offset the huge costs though, which is another way to participate.