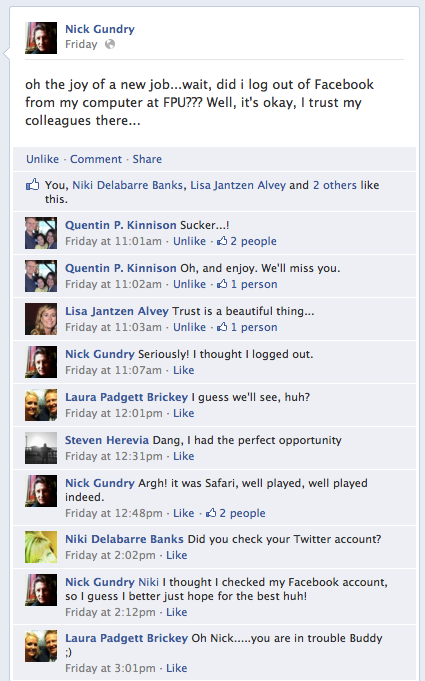 When I started my job at Fresno Pacific University over six years ago Facebook barely existed, Twitter was a dream in Jack Dorsey’s

head and Instagram’s million or so users had barely been born! Ok, ok Instagram users aren’t that young but the point is the social graph as we know it now barely existed.

During the last six years I’ve been part of the team team that has helped shape the digital marketing strategies. I’ve signed up for every cool startup that looked like it had a chance of redefining the social space, and many that just looked really cool.

As part of my role I had access to all the accounts for Facebook, Twitter, Foursquare, YouTube…the list goes on. And then a little over three weeks ago I handed in my notice. Now in my situation I had a great relationship with my employer, there’s no bad blood or bridges burned so I still have access, and I know that my access will probably be phased out as people get to it, or when they are sure they don’t need that “just in case” backup (or after this blog post is published).

But as I was packing my things last week it dawned on me how closely intertwined I was with the public face of my employer. I wasn’t the main person in charge of the accounts but there were shared responsibilities. If I had been fired and wanted to act unprofessionally would they know all of the accounts I have access too…(I gotta admit, I don’t remember all of them). Imagine for a second the damage I could cause to the brand in a few short minutes. Of course we had a plan for dealing with PR emergencies but what if the PR emergency was a wild card who holds the keys to the message. Scary isn’t it? 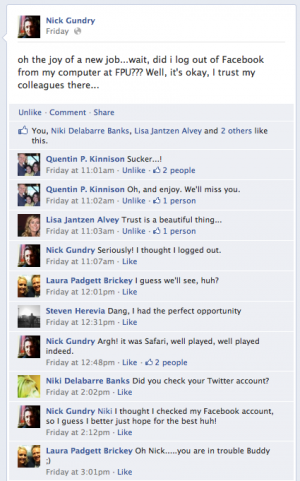 As I left on good terms and worked with a great team it was the flip-side of this situation that came back to bite me. I carefully went through my applications and logged out of Facebook, Twitter and anything else I could think of that might give my friends access to my accounts. I knew that if they could get in there’d be a random tweet or Facebook post by “me” that would appear. Just like so many times when I walked away from my desk, it was part of our team make up to prank each other. Sure enough during a lunch date with my wife the day after leaving a number of Facebook notifications made my phone vibrate. Well played team, well played.

Six years ago in the position I held before Fresno Pacific University I just packed up my desk and gave my keys back while my boss changed the server passwords. Now employer and employee have to make sure they protect themselves appropriately from being pranked or worse their reputation damaged. What do you do to make sure it doesn’t happen?

P.S. We talk about trust a lot in social media, but you know sometimes you just can’t trust everyone. Argh! I still can’t believe I got all the tools like Tweetdeck, Gmail and more but I missed Safari. Thank you Facebook for remote log out.

Looking to explore social media in 2012 but don't know where to start?