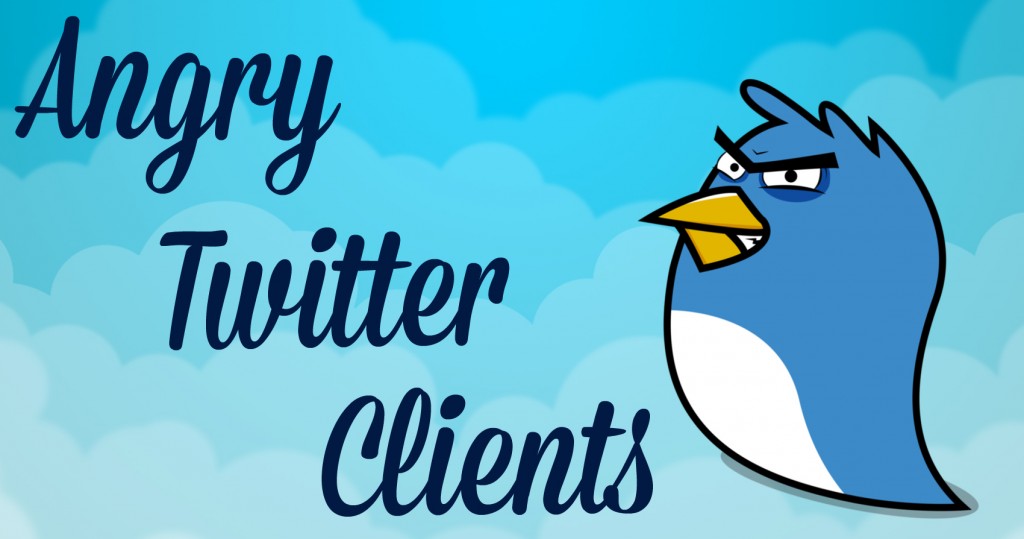 I’ve been working in Social Media for awhile and I’ve been fortunate  enough to avoid dealing with…them. You know them: Angry Twitter  Clients. One aspect of your customer service or product is not to their  liking and they will let you know in a tirade on a very public forum. A  majority of the time the Angry Twitter Client is disillusioned, and their  tirade is inappropriate for the forum. However, there are some cases  where, surprise! The Angry Twitter Client is completely in the right.

I work for an internet marketing company, and we deal with clients nationwide. We were rolling out a new product, and had received some preorders for it. About two months after we received preorders, we hit a snag in the product development and were forced to put it on hold indefinitely. This was communicated to our clients who had preordered and we discussed alternatives with them.

I was sitting in the office on a Wednesday afternoon, calmly working on social analytics, when my phone, which is connected to our Twitter account, began vibrating like it was possessed by that girl from The Ring. Bewildered, I tapped the notification, and my jaw dropped. Ironically, my first thought was: “It’s happening. Oh dear.” I opened up our social dashboard, and surveyed the situation.

A Twitter-using friend of one of our preorder clients had Tweeted our company’s handle about 8 times, each with the same general consensus: “Your customer service sucks, you should do better,” but with less niceties. I made what sounded like a panicked shriek to those in the office, and began to furiously reply to minimize the damage done. My first Tweet was a request for this person to follow and DM us, so that we could discuss the situation out of the public eye.

Once we began to DM, I quickly found out who this person was Tweeting for, and what their complaint was. I let them know that someone would give the client a call, and after I endured much berating, the person ended the conversation.

Now, what did I learn from my first Angry Twitter Client?

In my experience in other forms of customer service, it’s best to be as genuine as possible, especially if the client is completely correct in their complaint. Reiterate that you’re sorry this situation happened, and that you’d be happy to help. I tried to end any personal-sounding Tweets on the company profile with my initials, to indicate that this wasn’t a nameless robot handling their complaint.

In hindsight, the decision to be genuine probably retained a lot of our reputation with a networking group of which this client was a board member. And if anyone were to see the conversation later, they would see personal responses from a brand that was happy to help a customer who was not happy.

This is more of a shortcoming of our company in this particular case. Our company, when it comes to any client correspondence, is very meticulous in taking notes and keeping those accessible, in case something of this nature occurs…except for this particular client. I could find no paper trail on this client, nothing to indicate the alternatives they had been offered, nothing to indicate they would have a reason to be upset. This put me at a disadvantage, because the sales representative who had the most knowledge of the situation was at a conference out-of-state.

For my first Angry Twitter Client, this was the perfect storm. Every single thing that could go wrong did go wrong, and, while I was genuine in my responses, ultimately, the relationship with that client ended shortly afterward.

After the dust of the Twitter kerfuffle settled, I set to work documenting what had taken place, and communicating with the sales representatives who would be handling the situation from that point onward. It was my responsibility to make sure that the representatives had everything they needed from me in order to attempt to repair the relationship either by phone or in person. And, personally, I felt obligated to make sure the client was treated especially well, because I was determined to set a high bar for the handling of this particular Twitter confrontation, so that our company would have a standard for which to adhere for other, similar scenarios that may arise in the future.

The bottom line is this: If you’re genuine in caring for the customer and hearing their complaint, you are better off than if you are callously disregarding their entreaty as something childish. Unfortunately, Social Media is, more often than not, a place where a client’s dirty laundry is aired; however, it is a Social Media Marketer’s responsibility to see that the dirty laundry is aired in a way that doesn’t stink.

Food for thought: Have you ever encountered an #ATC? What’s your plan for dealing with them?

5 Tips to Establish Your Brand

The Times Are Changing – But Are You?