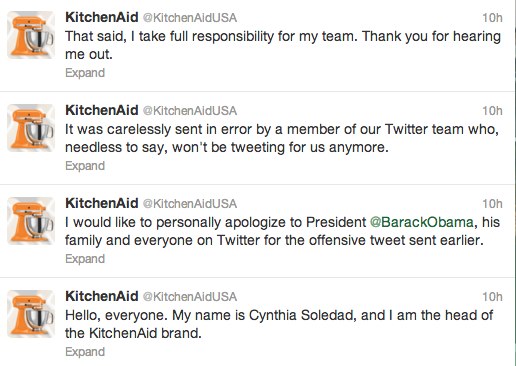 The biggest social media news to come out of last night’s first Presidential debate was not about the number of people watching or live-tweeting the debate, but about one brand’s tweet problem.

Cynthia Soledad is the head of the KitchenAid brand team and has issued a public apology on their Facebook page, but no owning up to the tweet by the offending poster (and that person is no longer tweeting on behalf KitchenAid). 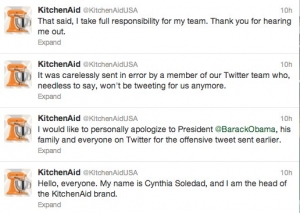 She (Cynthia) is offering responses to journalists on Twitter to talk about what happened, and she is planning to talk on the record about the incident. All good things. The only NOT good thing that I see is the fact that KitchenAid deleted the original tweet. Perhaps to avoid re-tweets and it getting out of hand, since the damage is already done.

At the core, a joke about somebody’s dead grandmother is probably not in good taste no matter what the situation. But, given the political climate of a tight election that is five weeks out, it now serves as a pure example of social media gone awry. People are mad, that a beloved brand would have someone employed that would have an opinion. While we’re all told to humanize our brand, be real, and stay relevant – that does not mean taking a stance on controversial issues (politics being one of them).

Of course, this is not the first time a brand has come under fire for the errant tweet of a staff member. We can all recall the PR agency whose staff member tweeted about how awful Tennessee was as they visited their large client, FedEx. Or, what about Gilbert Gottfried’s AFLAC tweet (and subsequent firing)? There are many more examples of course, but the key is, what can be done about it?

We know that the line between professional and personal brand online is often blurred. And, it’s even a little bit understandable that in today’s fast-paced digital world, people are itching to get their voice out there and frequently don’t take the time to think before they type. What’s often not understandable though, is that someone with the huge responsibility of tweeting from a brand (a consumer brand, at that), would not take the necessary precautions to make sure something like this never happens. Whether you use a totally different system or app to tweet for work vs. personal, or whether you make it a rule to double and triple check the account name before you post… there are precautions you can make. Perhaps one day, Twitter or like apps will offer up a confirmation, “are you sure you want to send this tweet from @kitchenaidusa?”

What can brands do to protect themselves in the case that something like this happens? It’s good old-fashioned crisis communications 101. Just as there is no way to predict or prepare for other company crises — your CEO getting arrested for drunk driving, or a staff member embezzling money from your company, there is no way to predict if a social media staff member will send an erroneous tweet from your brand. But, you can have a plan in place:

1. Train and Trust Your Staff – giving staff the power to tweet (or post on other social networks) on behalf of your company is giving them the keys to your kingdom. Educate them on best practices for handling personal and professional tweets. Make sure they know what to do in the unfortunate event that something like this happens. Make sure they know the consequences (getting fired?) if it does.

2. Have a Contingency Plan – if something happens, have a chain of command in place. Know who will be fixing the problem, and what the first course of action will be. Is it issuing a formal statement?  Does your corporate website need to acknowledge it? Should a press release or press conference be held? Are you planning to only replying to every angry person on Twitter or Facebook? Another good idea is to have a bunch of “worst case scenarios”, with messages and plans for each.

3. Own Up to It – Perhaps the first part of your plan should be to acknowledge that it happened. Don’t bury your head in the sand, or it will make it worse. People want there to be a response, and they want brands to interact with them. Don’t go the way of Dole, Nestle or other brands who failed to communicate during a crisis. You must move as fast as the criticism about you does (hence having a plan above).

4. Let It Go – There will always be people you can’t make happy, and naysayers. Know when to let it go, you do not want the issue festering on for days. The good news about social media, is that it moves so fast that often another event will catch people’s eyes and they’ll move on. Get your counterpoint out there, own up to it, and then let it die out on its own.

5. Learn From Your Mistakes – After the crisis dies down, take it as a learning opportunity. What could your company/brand have done better or faster? What could they have offered to disgruntled posters (I’m not saying you need to offer free products etc., but sometimes people want something more than an “I’m sorry” tweet. It depends on the situation and the brand.)? How can you address a similar situation in the future?

Do you believe that the criticism of KitchenAid over this tweet is right, or overboard? I imagine there will be many more stories and updates on this throughout the day, so we’ll keep you posted, and please share your thoughts in the comments below.

Your Business Made Social Media Mistakes? You're In Good Company