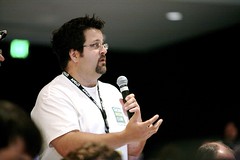 My SMC Story is in many ways the story of SMC, but in many ways, it’s only the inspiration that launched many other stories of connection, of community and of collaboration. In this picture on the right, captured by my friend, wedding photographer and Social Media Club supporter Kris Krug, I am standing up announcing my intention to form a community around social media for the first time during Gnomedex 2005. To form a community to help prevent some of the “mistakes” we experienced during the dotcom boom. To bridge the formal and informal, the structured and unstructured. To create a modern variant on the industry association. To be more open then closed. To be more accesible then restricted. To be more transparent, authentic and socially minded.

That was a huge insight then, and perhaps even more so today…

The purpose of #mySCMstory is to capture the stories of impact the organization has had on people’s lives and their communities. In this regard, Social Media Club is the most important business event and investment of my time I have ever experienced. Through SMC, I have made friends around the globe; learned to speak/present professionally; conitributed to an effort to re-imagine the Press Release with industry leaders; found personal satisfaction; and so much more.  Having the courage to try to build this organization in the face of overwhelming evidence that it wouldn’t work at global scale as I had envisioned, has given me the courage to try many things that would seemingly be impossible.

From a practical standpoint, I have made friends who will last me a lifetime. When I thought I was having a heart attack, friends old and new stayed by my side in a hospital in the South of Sweden, looking after me. When I first went to Paris, I not only had an air bed to sleep on, I had a community welcome me to present my view on the world, and they listened to me, challenged me and helped expand my thinking.

From more of a busines stand point, Social Media Club created numerous opportunities to work with big companies for pay and to support numerous non-profit efforts as charity. It lead to a book deal with Wiley. It lead to a short term consulting contract with a big tech company at a time when I was really struggling financially. It certainly had a major role to play in securing my current job at Deloitte. It has also lead to opportunities to help numerous entrepreneurs like Jason Alpin, Khris Loux, Josh Mackey, Todd Parsons and many others. In short, it’s been a huge investment in time/money, and while the investment didn’t pay off in obvious ways, or quickly, it has been paid off in ways I never could have imagined.

But the origin of #mySMCstory goes back to 1995/1996. It’s when I first started to realize how my intellectual arrogance was preventing me from seeing a full return on the value I contributed, and when I first realized I was missing real opportunities. While many of those advertising guys my interactive agency worked with really didn’t ‘get it’, the fact I told them so regularly and vociferously did neither of us any good. It was the same self-reflection that has served me well over the years in web site design, interactive marketing, management consulting, innovative ideation and community engagement. By being aware, I was ables to transcend my personal bias and subjectivity to find the most valuable distinction. To figure something out and help others in the process.

Fastforward to the origins of Social Media Club in summer of 2005 whe we first launched as BrainJams. I had no savings, I had no job, I had a startup without funding and I had created the beginnings of a movement. I can attribute the decisions to go for it to many things, including most importantly overcoming the fear that no one would show up, reverting me to the state of mind of a 6 year old planning his birthday party. But the actual string of events began with my friend Will Pate who was staying with me in San Francisco and told me about this #BarCamp thing his friend Andy Smith (#Termie, my man, my friend I don’t get to see enough) was helping to organize. I went. It changed my life. I am here and writing this because of this one series of life events. It began at WebExpo in Portland, and lead me to Gnomedex. And then to Northern Voice and onto BarCamp and ultimately to host Web2point1 as our first unconference. It opened my eyes to show that the idea I had back in 2000 for The Noble Pursuit, sharing of knowledge broadly was possible. Indeed, that it was inevitable.

Now I am sitting here in Austin, trying to imagine the next chapter of #mySMCstory, and I think I will be telling it this weekend, over the days ahead as I get to see and engage with my friends from all over the world descending on this great city.

So what is your SMC Story? How has Social Media Club impacted your life? What benefit has it brought? We’d love to hear it. You can publish it here or on your own blog, just tag it #mySMCstory so we can find it. If SMC has added value in your life, or merely provided a community of like minded people to share time with, please consider making a donation to support the expansion of our programs.

Has Social Media Demoralized Our Next Generation?