Five years ago today, 16 people gathered to discuss the emerging technology known as social media, set goals and initiatives around the launch of Social Media Club (determine what a professional trade association would look like), and dig into our first project, then known as the hRelease/New Media Release (has since been renamed to the Social Media Press Release).

We felt there was a need for a neutral third party platform in which people can share best practices, support ethics and standards, and develop programs to promote digital media literacy. We discussed forming as a ‘for profit’ vs. “not-for-profit”, but it was clear the new organization had to be a not-for-profit organization, money could not be the driver (and isn’t). We didn’t want to own it. We wanted to nurture it. We wanted to guide it. We wanted to support it. We knew ‘it’ was Social Media Club.

In many ways, that meeting feels so long ago – in other ways, it has been five short years. Through word of mouth, the support of over 1000 volunteers and staying true to our values of transparency and sharing, Social Media Club has grown from a single Chapter in San Francisco to over 300 Chapters in 47 countries, connecting hundred’s of thousand’s of people around the globe. We launched with lofty goals and while we have made some headway along the lines of education for the masses, our work is far from done. In fact, I think Social Media Club is just getting started, but for the sake of brevity, I will save that for a later post.

This past Thursday, several of the folks mentioned above along with members of the San Francisco Chapter leadership team met for dinner to discuss social media innovation and some of the surprises that hava taken place over the last five years and we will be sharing these videos over the coming weeks. I would like to thank Tom Foremski who interviewed me during dinner and captured some of my thoughts on Social Media Club’s role in the community, which I will also expand on shortly.

I would like to thank the fine folks at JESS3, who worked with us to create this lovely visualization featuring some of our key milestones over the first five years. JESS3 does amazing work and I am forever thankful for their support in making this timeline come to life. 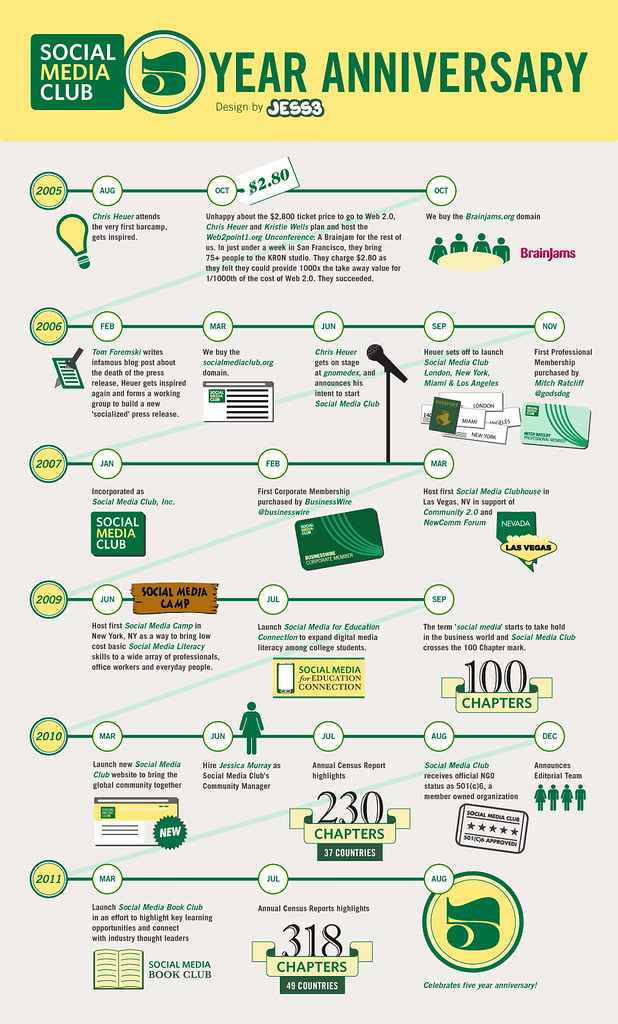 There are 1000’s of people we owe personal thanks to for their help in spreading the mission(s) of Social Media Club and offering their support over this first five years. It is because of all of you that Social Media Club is what it is today, and for that, Chris, Jessica and I thank you.