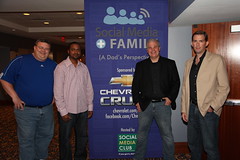 How can a person juggle family life with the demands of keeping up with the many conversations, news and information, and constantly evolving technology in an increasingly connected world?

If you’re a content creator like me, you may be wrestling with how much of your personal life should be shared with the public via social media.  My wife and I have had more than one conversation about whether or not we should be posting videos and pictures of our toddler Devin.  He may be way to young to be interested in communities like Facebook and Twitter, but parents of tweens and teens must now develop their own social media policies for their families to ensure the safety and harmony of both their kids and each other.

Chis Heuer, the founder of the Social Media Club is helping families understand the challenges, issues, and opportunities through this 12-city tour focusing on Social Media + Family.  It's a subject that isn't discussed very often at social media gatherings where the focus has mostly been on marketing and charity, but as evidenced from the first event on the tour, it certainly deserves more attention.

Atlanta hosted the kickoff event on Wednesday September 8, at the Downtown Sheraton with Chris Heuer making some opening remarks about the future of Social Media Club with the conversation starting at about the 10 minute mark in the video below.

The gathering brought together some notable “social media dads” including, Lamar Tyler from the popular family blog BlackandMarriedWithKids, GM's Director of Social Media / dad Christopher Barger, Donny Claxon of DaddyClaxton, and Ron Mattocks who blogs at ClarkKent'sLunchbox and is the author of Sugar Milk.  Each dad shared their issues and adventures with social media from a very open and personal perspective, and how they’ve established usage policies for their own family life.

Tyler, who is married with four kids worked for at Washington D.C. news station while he and his wife developed the blog that focuses on positive images of black families.  He recently quit his day job and moved to Atlanta. Today, the Tyler’s income comes solely from social media and the work they do to inspire others to be better husbands, wives and parents.  They have a huge Facebook following and produce documentaries that have changed the lives of many in their loyal community of fans and followers.

Barger often finds himself tweeting about family life when he's not chatting up General Motors products.  "I've live tweeted and live blogged from family vacations," he explained.   Barger said that sharing certain family experiences via social media "Helps humanize me and enables people to see that I am more then just a guy who works for a car company.”

One of Claxton's main interests is the safety of his three daughters online who live with his ex-wife.  He had plenty of stories to share, like the time his 11-year-old biological daughter changed her Facebook status to "in a relationship" and he had to have the conversation about her being too young for such things.  He said that though he has limited control over his children who live far away with his ex, he tries to watch everything all of his kids are doing online and help them navigate through these uncharted waters of growing up in the social media era.

As moderator Chris Heuer then pointed out, “The greatest power of Social Media is to make things visible”, which can be a bad thing if you are a company with problems, or a great thing if you are a dad who can see what their kids are doing online.

Ron Mattocks is a father of five.  He has three children from his first marriage, and two step daughters.  He said that he started his blog to get rich (jokingly), but admitted that he has encountered so many fails he could write an #epicfail blog on his own life.   What Mattocks did succeed in was writing a book called, "Sugar Milk: What One Dad Drinks When He Can't Afford Vodka,” which was inspired by his career transition from real estate professional to stay-at-home dad.

During the 45-minute discussion, these fathers shared many issues like how they've dealt with living with blended families; how they decide what family experiences are suitable for public consumption; and how they handle the many curve balls that life can throw at you.

Mattocks explained that he is always thinking about the consequences of his posts. Tyler said that he uses privacy settings on Facebook to control how certain members of his network have access to his posts, while Barger reminded the audience to use common sense and realize that "There's no such thing as a safe post unless your comfortable with the world seeing it."

So how are these dads keeping an eye on their children's online activity, and what advice did they share?

Barger said that his son isn't quite old enough for Facebook, but said once he becomes 13 or 14 the rule will be: accept dad as a friend or no Facebook.  Claxton reminded the audience that setting up a Website block isn’t enough.  "All you have to do is search how to unblock Facebook," he explained. "There's a series of pages on how to get on Facebook and Myspace through you school's server that is blocked."

For Tyler, communication with his family is key, and he believes that social networks give parents the opportunity to see what their kids are up to.  Mattocks' advice was to be aware of what is going on online, and don't be scared or threatened by technology.

Heuer also chimed in on the conversation and explained why parents should take the same approach as brands when it comes to dealing with kids and social media. "It's a matter of trust, and if you've earned your kids trust it makes it real easy, and if you haven't you’re in trouble."

As a dad and social media practitioner, I found this conversation both enlightening and encouraging.   The communications and media professional side of me tends to pay attention to conversations that focus around influence, strategy, and technology trends, but there are obviously issues much closer to home that I need to pay attention to especially as my own son grows up.

Hopefully, mothers and fathers alike will benefit from, and enjoy these Social Media + Family conversations across the country.  There are plenty of lessons to be learned from the many other dads who blog and moms who are sharing their personal experiences in Social Media Club meetings just like this around the country.

Many thanks to our sponsor for this event, the Chevy Cruze. Additional photos from Atlanta are on Flickr.

–Amani Channel is a Sr. Producer at KEF Media, and he blogs at My Urban Report. Twitter @urbanreporter