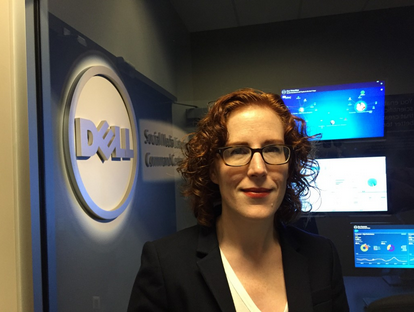 One look at the battleship gray cubicleland of Dell and you’d think this company is stuck back in days of “Dude, it’s a Dell!”

They started in Austin 30 years ago, as the local airport banners proudly announce. And sleepy Round Rock became a tech Mecca attracting the likes of  Google, Facebook, and the startup scene. There are Tesla’s and ramen shops now.

Alison, who ran social at FamilySearch in Salt Lake City, is now in charge of global social and strategy. You’ve probably seen her social media command center– enough of these tour write ups already on the web.

Her team’s area is bright and colorful- a millennial’s play-land. They’ve even got a giant conference room with the latest gadgets juxtaposed with relics of the phonograph and telegraph area, to show that listening and communicating are not new age concepts.

There’s a robotic coffee maker where you can order your favorite concoction via the touch screen or online.

Yes, I made a hot chocolate even though it’s 106 degrees outside. But I had to try it!

Curiously, everyone is in a cubicle, even the VPs who make blushing amounts of money. And people are free to work wherever and whenever– just get your work done. Few mega-corps give employees such freedom.

Back to social, Alison shared with me how she’s focusing the company on the processes and measurement necessary to make social woven through the company in a center of excellence model. The centralized model at larger companies tend to generate quantity instead of quality, generically targeted posts of people holding laptops, instead of finely tuned custom audience driven sequences.

We’re both big fans of checklists to drive repeatable excellence for every situation you can identify. That’s how to translate strategy into tactics.

Alison is one of the few director level folks who still keep their knowledge sharp. She runs her own reports in Omniture and isn’t afraid of data or tools.

She’s two weeks into her new job and probably getting accosted by vendors of all types, palms outstretched.  With two little ones, a new house, and other stuff going on, I’m not sure how she does it. Catch her speaking at an online marketing conference or on her blog.